By our reckoning, Flavors of India in Columbia, MD should henceforth be the benchmark when it comes to bad Indian food.

Why this crappy Maryland Indian restaurant opened its doors is a mystery known but to God and its earthly owners.

If you love Indian food as much we do, Flavors of India is the last place you&#39d want to visit.

Columbia (MD) most certainly has better Indian restaurants than this impostor.

Flavors of India - Repudiation of Taste

A lot of what we tasted at this Columbia India restaurant was not merely bad but a complete repudiation of taste.

Tandoori Chicken was horrid and definitely not meant for humans.

Marked by an obscene pink color, the Flavors of India version was a poorly marinated mess that made us want to throw up. 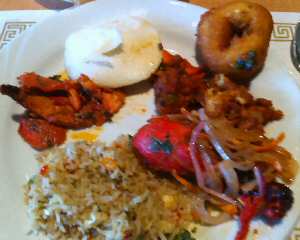 We have no doubt, none whatsoever, that the chef at Flavors of India had his training under Marquis de Sade.

For none other than a disciple of Marquis de Sade would serve diners Idlys as abominable as what were offered to us.

The edges of the Idli were dry and the middle was hard. Perfectly suitable for use in construction sites or laying roads but inappropriate for diners.

Medhu Vada had a slightly sour taste that we found repelling.

Masala Dosa was alright but the onion-potato filling inside was hopelessly bland.

We've said this a million times - an Indian restaurant too lazy to serve you fresh Chutney deserves your raised middle finger. Do so with gusto to these bozos at Flavors of India. 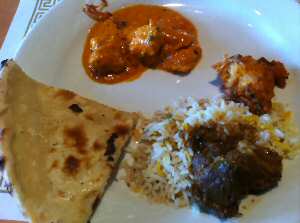 Flavorless Chicken Tikka Masala (top)
Thank god for the Mint Chutney that was at room temperature and one of the few tasty items of our meal.

Rasam was too thick, almost as thick as Sambar, and lacked the desired pungent flavor of Black pepper. Drumstick Sambar showed no evidence of any Toor Dal being used in its preparation and was low on Sambar spices. Instead, it had more of a Garam masala flavor.

Paneer Buttter Masala was way too sour while the creamy Mutter Paneer was too bland.

The shaitan chefs in the kitchen were relentless in their onslaught.

Rice Kheer was not merely low on sugar but the milk was way too watery. 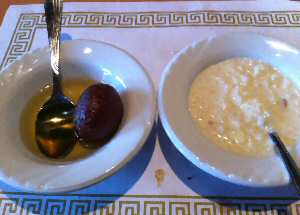 Our Tamil-speaking waiter Sashikumar from Karur was one of the rare silver linings of a forgettable meal. A friendly soul, the young man went out of his way to make sure we were comfortable, got us our Naan bread and Masala Dosai and repeatedly inquired whether we needed anything else. We were tempted to respond "Flavorful Indian Food" but restrained ourselves.

During our meal, Flavors of India was mostly empty and, no, we weren't in the least surprised considering the flavorless food the restaurant doles out.

Bottom line, if you love good Indian food you're unlikely to get it at Flavors of India. This restaurant takes bad Indian food to a new low.

In a long life, we've heard many lies. But few as devilish and so blatant as the name of this restaurant.

A more apt name for this trashy Indian restaurant in Columbia would be Flavorless Indian Hole. - © MDIndia.us